One of the words we often come across during these Corona times is vulnerability. Corona is most dangerous to those who are vulnerable, it is said. This category entails primarily the elderly and the immunosuppressed, but also those who, due to a lower socioeconomic status, aren’t receiving proper healthcare.

Corona can be life-threatening to anyone, young and healthy as well as old and asthmatic, but it most certainly still discriminates and is a brutal highlighter of society’s inequalities.

Shortly after the world’s leaders realized the gravity of the situation, and regulations were issued to make us practice social distancing, another more discreet type of vulnerability appeared. That of mental health.

Lately, social scientists, psychologists and psychotherapists have been discussing the immediate effects and the future implications of social isolation on our psychology. What does it do to us when we’re robbed of the events that give us a sense of belonging and social connection? What happens to those who are already predisposed to depression and anxiety when their usual therapeutic “tool box” isn’t available to them?

A significant lesson that we’ve learned from the real-life experiment of globalisation is: Loneliness kills. People die from disconnection. The other side of the coin is that we feel fully alive when we are really being seen, and that social support is essential not just for our mental health but also our physical health. It has a direct effect on our immune system, because before anything else we are social beings. What all this means is that Corona  might not only kill us through infection but also through long-term psychological consequences.

In defining the fuzzy concept of vulnerability, the researcher Brené Brown states that to be vulnerable is to be willing to be seen in order for connection to happen. Vulnerability is at the core of our struggle to belong and feel worthy. And so right now, with our world in a crisis-stricken state, it’s safe to say that there’s a tremendous peak in psychological vulnerability.

How does vulnerability currently manifest in our daily lives? Maybe you’ve seen your supervisor suddenly have to breastfeed her baby halfway into a video call, perhaps your colleague got all teary-eyed in response to being asked how he was doing, maybe your manager had her toddler photobomb an important meeting, or you yourself have had to prematurely end meetings to tend to the unpredictable, urgent stress of working from home. This is the type of vulnerability that confronts us with what it is that makes us human and relatable. This is the type of crisis that can move us in a new direction. A wake-up call to realize and become more aware of our humanity.

But vulnerability might also have the destabilising effect of shattering the secure foundation of your life, for instance if you’ve been laid off due to Corona, or if your freelance gigs have been cancelled due to lockdown. This is the type of vulnerability that throws our fight or flight response system into a state of overdrive.

When Brené Brown explores vulnerability, she does so from a place of security and safety, where vulnerability can be played around with – as a neoliberal tool that can give you a full life. “Dare to embrace your imperfections.” “Tell the story of who you are with your entire heart.” “Have the courage to share your insecurities.” These are the mantras of vulnerability, packaged as a cute concept, where all you have to do is be brave enough to accept the flaws that make you “oh so human”.

Now, this is no longer a choice for us to make. Vulnerability isn’t for us to welcome into our lives — it has been forced upon us, and those with the least social support are those taking the hardest blow.

That’s why those of us who are privileged to still have safety, security, social connection and support, have the responsibility to extend our sense of agency to those who need it. At least in my lifetime, the private has never been more political. If we hold a position of power, even if this is simply through the fact that we have the means to “embrace vulnerability” rather than having had this pandemic take away our life security, then we must hold space for the seriously vulnerable.

My hope is that if there is to come anything psychological meaningful out of this crisis, it is that we need to be more accepting and supportive of each other’s psychological vulnerability. We need to give permission to each other’s off days, since it’s only to be expected that we’re all feeling a little raw and unhinged from this new normal.

Without this turning into a melodramatic appeal, just imagine for a second a world where a person’s greatest asset was the ability to help and be helped. A world where our inherent interdependency was celebrated and encouraged. Then there wouldn’t be a job for me as a therapist. And I think I’d be totally fine with that.

****Join an online panel discussion and meet-up exploring vulnerability from a psychological and societal perspective, Friday the 24th of April**** 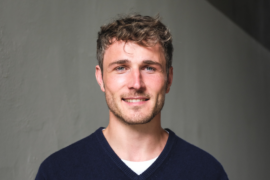