There are psychological concepts that become so in vogue that they embed themselves permanently in our language and culture. One such phenomenon is the impostor syndrome.

It’s interesting as a therapist to see what happens when a word becomes fashionable in describing a common problematic experience. Slowly, rather than the problem having an alienating and isolating effect, it becomes something more externalized, something we have the words to talk about, something which is tied to culture and circumstances. In the case of the impostor syndrome — meaning the tendency in which a person doubts their accomplishments and has a persistent fear of being exposed as a “fraud” — it seems like my clients appreciate having the dread of being “found out” described in podcasts and articles. It normalizes their situation and enables them to “name the problem” when they fear that their achievements are undeserved.

Though, in recent years, the impostor syndrome has become widely discussed as a millennial issue, it was already initially described in the late 1970s by Pauline R. Clance and Suzanne A. Imes. They conducted a study which showed that many high-achieving women believed they were not intelligent enough and that they were over-evaluated by others. While it was first thought that it was a phenomenon only prevalent amongst professional women, research done over the last decade finds the impostor syndrome to affect women and men alike. More specifically, studies show that around one third of young people suffer from imposter syndrome, and 70% of people experience it at least once in their lives.

There is, however, still reason to believe that millenials are more prone to having an internal experience of phoniness despite evidence of high achievement. After all, they’ve entered the workforce at a time of insane technological advancements and constant comparison on social media. Add to this, that the ethos of the gig economy and the neoliberal way of life is that we have to be in a state of perpetual learning and development. This makes most people feel like they are behind and lacking in expertise, while the way our colleagues and friends portray their careers and lives on Facebook and LinkedIn, make it seem like they have it all together.

Also, there’s a bigger risk of suffering from impostor syndrome when you belong to a minority group. This is both due to the fact that a lack of representation can make minorities feel like outsiders, and also that discrimination adds to the stress and anxiety when coupled with impostorism.

Other risk factors include working alone (then it’s easier to get stuck in one’s head) and being in a profession that is particularly unsteady or competitive (in creative jobs we’ll be judged by ever-changing subjective standards and in medicine and technology, we feel like we should keep up with the advancement and change, however impossible it might be).

There are many resources on how to help alleviate impostor syndrom. Practising more self-compassion, reminding oneself that nobody is perfect, and owning the right to make mistakes, are practices that can help. Reminders of achievements can also work to reduce the spiral of doubt, for instance by keeping a “good news diary” of all your accomplishments that you can re-read when feeling self-critical.

If your impostor syndrome starts leading to more serious anxiety and depression, it might be worth seeking out a professional. If you’re living in Berlin, check out the practitioners working at my practice Mittelweg 50, or look for a specialist in the new therapist directory It’s Complicated. 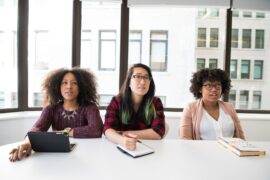 Companies that care about mental health